You on spring break…

I know you are anxious to get out of the building and spend a week away having fun on spring break. Before you go though, I have a couple of questions about how you want to spend the next 3 weeks studying Ecology. Do me a favor and read the questionnaire below and answer the questions fully and honestly. After that, have a great break…

P.S. – We can’t wait to see your evolution projects on April 7th!

Obviously you are, otherwise you’d still be there right?

Seriously though, today we’ll begin collaborating on and producing some type of presentation to introduce 6th graders to the concept of evolution. Now, there are lots of ways to go about this, but to get you started here are some things to keep in mind:

Along with your product, you will need to have a journal that is kept each day to track your activities, progress, and estimated completion date. This is done on an individual basis and will only be seen by your instructor.

The project is based on a grade of 100 points, and there are further directions and a rubric available using the link below, or on the Semester 2 Docs page.

My last warning to you will be to stay diligent and to be efficient. Make a plan and execute the plant. Focus on the details but do not let them consume you. Remember you are a part of a group/team and there are others counting on you to do your duty. Good luck and have fun!

Now that we know how to find the general structure of a molecule using Lewis Dot diagrams, we can actually find the three-dimensional shape of a molecule AND BUILD IT! We can find the shapes of molecules using the VSEPR (Valence Shell Electron Pair Repulsion) Theory.

The idea is that atoms and electrons found around a central atom are repelled by each other because of the negative charges of the electrons surrounding each (remember opposites attract +/- and similar charges repel -/- or +/+). In other words, everything bonded or attached to the central atom wants to be as far away from everyone else as possible.

So let’s look at NH3 for example.

NH3 has a central atom, three attached atoms, and 1 electron pair. So the ABE structure would be AB3E

I like to think of the ideal geometry as places on the central atom with thing happening. If there is only 2 places where things are happening (attached atoms or free electrons) then it’s Linear. If there’s three places, it’s Trigonal. If there’s four, it’s Tetrahedral.

Below is a great link to a video explaining the different shapes and where they come from.

Since NH3 is an AB3E structure there are 4 places where things are happening (B 3 + 1 E) so NH3 is Tetrahedral. 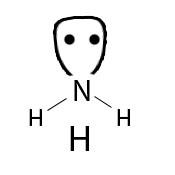 Along with the ABE chart is the list of Ideal Geometry and Molecular shape. The shape is based on the idea that the other atoms want to be as far apart as possible AND that free electron pairs need a lot of space to roam.

NH3 has 1 free pair of electrons that float to the top of the molecule as if they were in a balloon. The three Hydrogens then act as a tripod for the entire molecule holding it up. Therefore we say the shape of NH3 is pyramidal.

Now that you have completed the simple VSEPR diagrams and made your models of Linear, Trigonal, and Tetrahedral molecular geometry… it’s time to break the rules…

The rule we’re breaking is the Octet rule. To this point you have limited the central atom to sharing up to 8 electrons. But, If your Lewis Dot Diagram has too few electrons, you add pairs of electrons to the central atom.

Let me show you what I mean. Let’s say that we have XeF2.If you calculate the valence electrons you should have 22.
But when you make the Lewis Dot Diagram, it only has 20 ve–.

So, we add a pair of electrons to the Xe central atom giving us a total of 22 ve–

This creates a new Ideal Geometry known as Triangular Bipyramidal, which means it has placement for 5 parts (attached atoms or free electron pairs) around the central atom.

Like Tetrahedrons, we are working now in 3-dimensions instead of 2.

There is also an Ideal Geometry for 6 parts known as Octahedron. Think of the central atom as a 6 -sided die. So atoms can be bonded in 6 places and in 3-dimensions!

Believe it or not, we actually have was of finding this answer despite the fact the Tyrannosaurus Rex has been extinct for over 65 million years. We can determine a T-Rex features, including taste, using similar features (which we now know are called homologous structures). shared with animals the T-Rex is closely related to.

Recall that yesterday we learned that the more features you have in common, the higher the probability that you share a common ancestor/DNA (the exception would be convergent evolution where two species become increasingly similar despite the fact the originated from different ancestors). So what we can do is plot relatedness, based on characteristics, on a graphic called a cladogram, like the one shown here.

So Today, that’s exactly what we’ll be doing, using the link at the top of this post, you’ll follow the steps to learn how cladograms are created, organized, and what the different branches of it mean. By the time you are through, you will know what it tastes like to bite into a big fat dino-burger!

The images below show different types of evidence that prove Natural Selection is the driving force behind evolution. Use these images, information rom your iBook, and the web to create answers to my questions and learn more about the evidence of Natural Selection. For an added challenge, see if you can match the name of the evidence to it’s illustration (Mouse over the images to see the answer):

Why do all of these DIFFERENT animals have the SAME bones?

Who do we SHARE the most DNA with? What does this mean about our Evolution?

Why do these DIFFERENT types of animals have the SAME feature? Does this mean that they are closely related? or does it mean that the trait they share is an advantage in their environment?

If Humans choose the traits they want plants or animals to have is it still natural selection?

Why do these DIFFERENT types of animals look so SIMILAR? Does this mean they are closely related? What do Analogous structures have to do with this type of evolution? 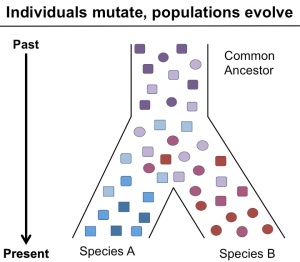 Are these 2 new species of butterflies or still the same? What will happen over millions of years, will they look more similar or more different?

How come only one individual had a red star in the original population, but almost half have one in the new/resulting population?

Why do humans share more DNA with Mice than chickens? What does this tell us about our evolution?

Whales have legs??? What does this information tell you about Whale ancestors? where did they live? What has happened to the legs over millions of years and why did this happen? Can you think of any human examples of this? 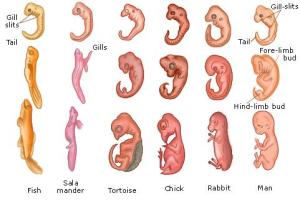 Why do human embryos look so similar to fish embryos??? Does this mean we’re related to fish?

does this display help the peacock survive in its environment? or is it just for the ladies? 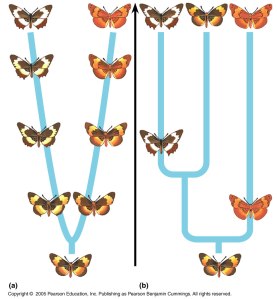 Compare the two types of evolution… Which one says that catastrophic events cause major changes in the population? How would you describe the other? 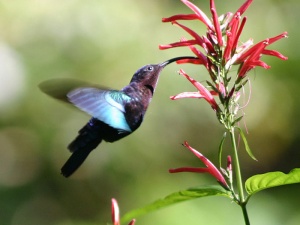 Do you think this plant always had flowers perfectly suited to a hummingbird’s beak?

That’s what we’ve been talking about the last few days. We’ve talked about theories and evidence that supports or refutes those theories. There have been lots of theories of evolution but we’ve focused on two…

Evidence suggests that Drawin’s theory, which he illustrated in his book “On the Origin of Species”, is accurate. Can you think of any instances of organisms that look like other species but have some type of special advantages to help them survive in their environment?

To review, click through the Darwin information pages and see if you can help a species of furry creatures live for a million years!

Yesterday, we started the process of investigating what fossils can teach us about life on Earth. Below this post is the information from yesterday. Your goal is to use evidence you have found to answer the Big Idea Question today:

How do Fossils show that the Earth, and the Life-Forms on Earth, have changed over long periods of time?

When you have completed that activity, you can take part in the going further activity, A virtual adventure as an archeologist.

As a part of the adventure you will write small entries in a journal. To Access your Journal, use the School Name “Cathedral” when prompted. Your Journal entries will be saved and shared with me so I can monitor your progress. The journal and “special assignment” is worth credit and will apply directly to your Evolution Final Project at the end of the Unit. This is not a required assignment, but rather a chance to go deeper into the content if you are interested in it.

One of the most enjoyable parts for both myself and my students about studying evolution, is a chance to search for evidence and create your own hypotheses and theories based on your own evidence. Sure the terms and concepts may not be up for debate, but how we use and interpret them is. Today, you and your new table mates will seek to answer a series of questions. Each of these questions will lead you to creating your own theory which you will type in below.

The Guiding Questions can be found by following the link to the Google Doc. Make sure, you follow the directions carefully to make your own version of the Google Doc.

You will use the iBook and an interactive website from the University of California Berkley to answer the questions.

UCMP: Getting Into the Fossil Record

Finally, when you are done with your guiding questions as a group, you will formulate your own theory and share it with the world. Answer the question below and feel free to view how other interpret the data.

Click here to let Mr.Kubuske help you with your Docs/Sheets

As an educator (teacher, principal, coach) with 15+ years of experience in every type of school (rural, suburban, urban, private, public, K-8, 9-12, & Higher Ed). My goal is to help as many teachers as I can! Let me help you make your spreadsheets and docs do all the work for you! Get your time back and take your classroom and lessons to the next level!