Alright SEHS students, I went ahead and did you a favor and set up a spreadsheet for you to learn and do 6.1.6. Luckily, you should be able to over a version of this spreadsheet in the Apps Google Sheets or Numbers.

A T-test is how researchers determine if there is a Significant Difference between two sets of data. Take a look at the three graphs below…

In the first two graphs, there is a large amount of cross-over of the two graphs. What this tells us is that the test creates similar results despite the changed variable. This means that there is NO significant differences.

But in the third graph, less than 5% of the graphs cross over. If this happens then we can say that the two sets of data are Significantly Different, which is the opposite claim of a Null Hypothesis (H0), which says there is no significant difference.

So, when you run a TTest, you are calculating Probability, or P.

Download the Spreadsheet and follow the directions on how to do the calculation. You will use the result of the test in your quiz as well! If you have further questions, ask me in class or email me at jkubuske@gocathedral.com

Sorry I can’t be there 1st or 2nd period. To the left is a picture of what I’ll be doing today…

below are the directions on what you’ll be doing today:

Complete the quiz below. Submit your answers then email me (jkubuske@gocathedral.com) your note using the “share” button on the App.

Lots of great stuff happening this week in Science and at Cathedral High School. Here’s a recap..

Students are practicing using the Scientific Method by devising experiments to test the strength of toilet paper -or- the absorbency of paper towels, they’ve come up with some pretty creative ideas. 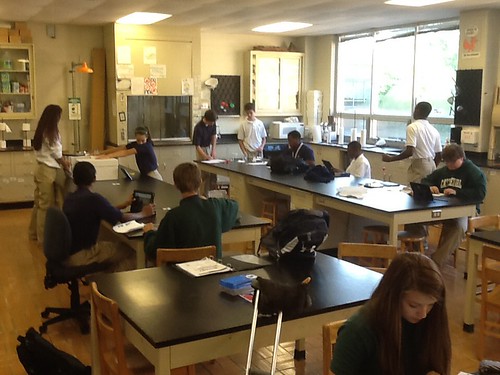 We’ll also start covering what it means to be “Alive” this week and will soon be moving on to Unit 2… Biochem!

We’re working on 6.4 on our websites which is all about good training regimens and the principles that dictate what a good training program is.

We’ll be welcoming our students’ parents into our classrooms this Thursday so they can meet the teachers and see what their student is in for this school year!

Our fall sports are off and running with Soccer and Tennis already starting matches. Volleyball kicks off this week as well as our Cathedral Fighting Irish Football team who looks to topple nationally ranked Ben Davis on Friday night!

You know that’s funny. Anyway… I’m sorry I cannot be wit you today because of a Doctor visit. Please find your directions on what to complete in the short time we have together today below.

Turn in your worksheets from yesterday. Then you can work on the “What is Alive” activity with your table mates. Create a concept map of what you think the characteristics of living things are. lease think and share freely and openly. If you have disagreements, think logically and talk out your differences before the group comes to a conclusion. There is paper on the back table and colored pencils in the back of the room. Good Luck!

6.3 is due today. Please make sure all of your documents and presentations are “shared” with me and complete your quiz. Take time for comments if necessary. Then, start on 6.4!

Sorry I can’t be in class with you today. I’m actually in the building, I just have to be in a meeting this morning. So do me a favor, get these items listed below done and we’ll turn them in tomorrow.

Both os these will be turned in tomorrow and you ARE permitted to work on them together.

One last thing, there is a chance I won’t be in class tomorrow for similar reasons, so check back here for updates or follow me on twitter @CoachKubuske. Have a great day!

Today we’ll be going over some important information about your safety in a Lab setting. After review the Lab Safety rules (check the documents page for your specific class for a PDF version), take a look at the image below. See if you can spot some incidences of failing to follow lab procedures for safety.

Reminder there will be a “Common Sense” Lab Safety Quiz tomorrow and you must pass with 100% before being allowed to use the lab.

Also! You must have a signed Lab Safety Contract turned into Mr. Kubuske by Wednesday to be allowed to use the lab.

I know… I feel the same way.

Welcome to Mr. Kubuske’s Class Blog. First, please set a bookmark or a link to your home screen. After that feel free to browse this page. At the top are links to class pages where notes, assignments, and documents will be posted for you to download as we work through our curriculum. There’s a page for students, a page about Mr. K, and other resources available. On the right (or bottom if you are using Safari on the iPad) are links to my twitter and other information that will help you.

Next, there are 3 papers on the front table I’d like you to pick up. You will need to keep these papers all semester so put them in a safe place. Eventually, these papers will need to go in your Class 3-ring binder.

Last, for today’s class activity, you’ll need to get a piece of string. The strings are on the old pencil sharpener near the bookcase. Please go ahead and pick up a piece of string and come back to your seat. Once you have the papers and your string you can complete the assignment titled “Biology Procedures Activity” that the instructor gave you.

As a reminder, you will need to download your iBook at home or in a place where you can be on a wifi network for a long period of time.

Thanks for participating and we look forward to working with you this year!

I know, I know! Only one week to go! Might as well start the posting now to give you a little bit of what you’ve been missing.

In case you were not aware, this year I’ll be teaching Honors Biology again and…

But fear not,I’ll still leave up all of my documents, keys, and notes for my former academic chemistry class (just for you XBio 13-14).

Instead of chemistry however, this year we are embarking on a new frontier of education here at Cathedral High School with the very first course of

If you have the privilege of partaking in this standard level IB course with me I guarantee it’ll be like no class you’ve had before. I have worked tirelessly this summer to prepare the course content for you. I will be incorporating best practices from IB, STEM, Tim Elmore, and my own masters program in the same course work. It will be a class based on experiential learning,

problem solving, and research. We’ll talk more on that as the day draws near, but if you’re interested in learning more about this course, use the tab on top of this page of click here. In the meantime, enjoy your last week of freedom.

Welcome to Mr. Kubuske's Blog. This blog is a resource for our Honors Biology & Academic Chemistry class. Feel free to familiarize yourself with the links and pages associated with this blog. Please bookmark this page, follow me on twitter, and check back often for more info and updates.

Send Us Your Science Pics

Send your science class pics to @CoachKubuske with #SciencePics so we can add them to our Cathedral Science Flickr account and have them posted here on this site!